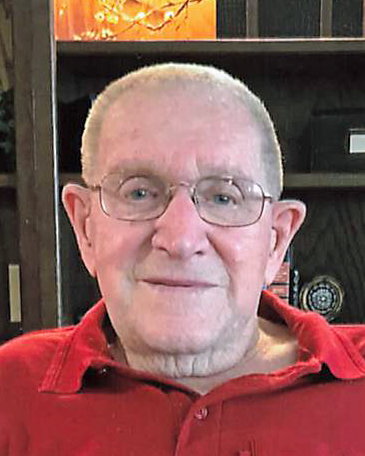 He was born on August 25, 1923, in Wausau, Wisconsin, the son of the late Frank Sr. and Ella (Volkman) Eschenbach.

In 1943 he was inducted in the Army-Air Force and served in World War II in the “Asiatic-Pacific Theatre” and was honorably he was discharged in 1946.  On May 20, 1950, Warren married the former Phyllis Mary Wimmer at Saint Mary’s Catholic Church in Marathon City and she preceded him in death on July 20, 2004.

Warren had a long career working as a water treatment plant operator for the City of Wausau Water Department and retired at age 62.  In addition, he was a part time employee at Jerry’s Music, for many years having delivered numerous televisions, pianos and organs throughout the Wausau area.  He particularly enjoyed being a crossing guard at Riverview and Franklin Schools for a number of years and was known as “grandpa” to the children.

Together with his married family, he enjoyed flower and vegetable gardening, camping and cooking.  Some of his other pastimes included bowling, dancing and enjoying a cottage on Somo Lake that he and his wife purchased where the family enjoyed boating, waterskiing and fishing. One of Warren’s most cherished memories was going on the “Inaugural Never Forgotten Honor Flight”.

Their marriage was blessed with two daughters, Paula (Jeff) Waeghe, Gladstone, MI and Sue Hilgemann, Weston and one granddaughter, Amelia Waeghe of Gladstone.  Other survivors include special cousins, Patsy Genrich and Elaine Mueller and many nieces and nephews.

In addition to his wife, Phyllis, Warren was preceded in death by a son-in-law, Allan Hilgemann, brothers; Arthur and Frank Eschenbach, a sister, Marion Hirsch and a special cousin, Murill “Jake” Dahm.

Mass of Christian Burial will be celebrated at 11:00 a.m. on Tuesday, August 10, 2021 at the Church of Saint Anne, Wausau with Rev. Alan Burkhardt and Deacon Ervin Burkhardt officiating.  Visitation will be on Tuesday from 9:00 a.m. until time of services at the church.  Burial will be at Restlawn Memorial Park, Wausau, with full military honors conducted by the American Legion Montgomery-Plant-Dudley Post 10, Wausau.

In lieu of flowers memorials may be directed to the Church of St. Anne remodeling project or the “Never Forgotten Honor Flight”.

The family would like to extend a special thank you to the caring and compassionate staff at the Renaissance Assisted Living that was provided to Warren and his family.

Helke Funeral Home, 302 Spruce Street, Wausau is in charge of arrangements. Family and friends may go to www.helke.com to leave words of remembrance and to view the services being livestreamed.

To order memorial trees or send flowers to the family in memory of Warren Eschenbach, please visit our flower store.