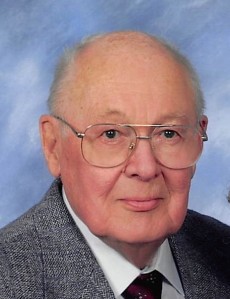 Walter Tamminen, 90, of Wausau passed away on Sunday, November 4, 2018 at Wausau Manor.

He was born June 3, 1928 in Amasa, MI to the late Walter and Lily (Hillson) Tamminen.  Walt grew up in Crystal Falls, MI and after graduating from high school enlisted in the U.S. Army.  He served his country at the end of WWII and was proud of being able to go on an Honor Flight trip to Washington.  After the service, Walt was a computer programmer at the Great Lakes Training Center in Waukegan, Ill. where he met the love of his life, Marilyn Elfering.  On September 2, 1950, Walt and Marilyn were married at St. Gilbert’s Catholic Church, Grays Lake, Ill.  They moved back to Crystal Falls with Walt working at Inland Steel.  He later graduated with a degree in Computer Programming from Northern Michigan University.  The family then moved to Wausau where Walt worked as a computer programmer at Connor Forest Industries.  He later worked at Wausau Homes until his retirement in 1990.  In his retirement, Walt loved his maintenance job at Forest Park Village.

Walt was an avid reader, he had an insatiable curiosity about nature.  Whether it was walking in the woods, digging for mineral specimens for his collection or experiencing his greatest pleasure as a “birder”, Walt was passionate about the outdoors.

Funeral services will be 11:30 a.m., Friday, November 9, 2018 at Helke Funeral Home, 302 Spruce St., Wausau.  Reverend Sid Bouldin will officiate.  Following the service, full military honors will be presented by the VFW Burns Post #388.  At a later dated, burial will take place at Evergreen Memorial Cemetery, Crystal Falls, MI.  Visitation will be Friday from 9:30 a.m. until the time of services at the funeral home.  You may sign our family guest book at helke.com.

To order memorial trees or send flowers to the family in memory of Walter Tamminen, please visit our flower store.