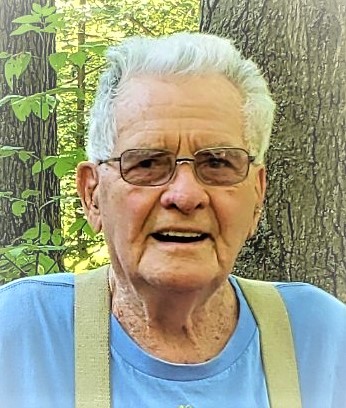 Ted was born on February 25, 1929, to the late Anton and Theresa (Bauer) Schoenfuss in Marshfield. He grew up in Stratford on the family farm and attended Stratford High School, graduating in 1947.

He served as Sargent in the United States Army during the Korean War in 1951 as a demolition specialist. In 1953, he married Imogene Emmerich and worked for GTE as an installer and later as Supervisor for the Colby area. He retired from the phone company and moved up to Tomahawk to live on the lake; before returning to the Wausau area to live with family until his death.

Ted’s hobbies included fishing, cooking, and gardening. He thoroughly enjoyed yard work and tended to a beautiful flower garden. He was also a skilled rockhound and served as a cub scout den leader for several years.

A Memorial Service will be held at 2:00 p.m. on Thursday, February 25, 2021, at Helke Funeral Home, 302 Spruce Street, Wausau. The Rev. Samuel Martin will officiate. Visitation will be held from 1:00 p.m. until the time of service at the funeral home. Military Honors conclude the service by American Legion Montgomery-Plant-Dudley Post 10 Honor Guard of Wausau. Interment will be held at a later date.

The service will be live-streamed at www.helke.com and made available for future viewing.

To order memorial trees or send flowers to the family in memory of Theodore Schoenfuss, please visit our flower store.