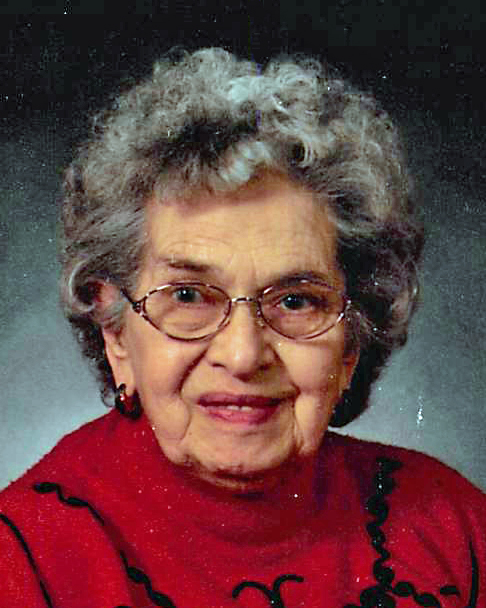 Rowena Bertha Buettner, age 90, went to be with her Lord on Thursday, June 7, at Applegate Reflections in Wausau.  She was born March 27, 1928, in Wausau, WI, to William and Evelina (Radant) Runzheimer.   She was baptized on April 27, 1928 and confirmed on April 6, 1941 at Trinity Lutheran Church on Stewart Avenue and attended school there through 8th grade. In 1945, Rowena graduated from Wausau Senior High School.

Rowena met her husband, Robert Buettner, on a train trip to a Lutheran Walther League convention in Portland, Oregon. They were married on July 22, 1950, at Trinity Lutheran in Wausau by Rev. LeRoy Koepke.

Bob & Rowena built their house on the corner of 28th & W. Wausau Avenues, and lived there for their entire married life until 2010 when they moved in to Applegate Terrace one mile away.  Robert preceded her in death in 2017 after 67 years of marriage.

Before marriage, Rowena worked at the Telephone Company in Wausau and paid for the first telephone line to her family’s farm in the Town of Maine.   After her children grew up, Rowena worked at Drott Manufacturing in purchasing, and the Girl Scout Service Center as store manager. After retirement, Rowena volunteered as a Day Manager at Bethesda in Wausau.

Church activities were important too.  She & Robert belonged to the Lutheran Layman’s League and took the family on trips to many LLL conventions across the U.S.  She served on the Altar Guilds at both St. Mark and Trinity Lutheran churches.  As part of Trinity’s 55 Plus group, she made maple syrup and did roadside cleanups, attended Thursday Morning Bible Class.   Her participation in Lutheran Women’s Missionary League spanned 4 generations from her grandmother, Bertha Radant,  her mother, Evelina Runzheimer, to her daughter, Sharon Hanke.She also served as a Maine 4-H Club assistant leader and helped with her granddaughter’s Brownie Troop.

A service of Christian burial will be held at Trinity Lutheran Church on Stewart in Wausau, WI, on Friday, June 15, at 11:00 am.  The Rev. Zachary Holdorf will officiate.  Visitation will take place at the church from 9:30 am until the time of the service.  Helke Funeral Home is assisting with the arrangements.

To order memorial trees or send flowers to the family in memory of Rowena Buettner, please visit our flower store.