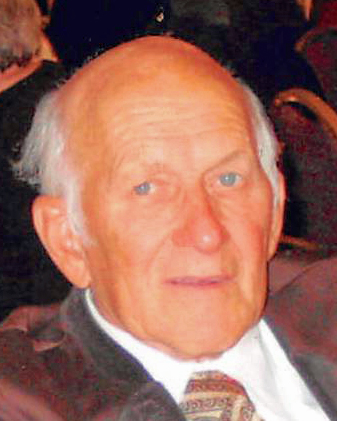 Roger was born January 4, 1928 in the Town of Theresa, WI to the late Louis and Laura (Sterr) Adelmeyer. Following High School, he honorably served in the US Army during WWII.  While serving in Austria, Roger met Edith Reisz and the couple was married on January 25, 1950 in Vienna.  The couple returned to the United States following his discharge from the Army and resided in the Milwaukee area.  Roger founded Adelmeyer Tool, a tool and die business, that quickly became a family operation and trained many apprentices over many years of service.  Roger and Edith celebrated 64 loving years together prior to her death on August 28, 2014.

Roger was a good man and father; he deeply loved his family and cared for Edith during her later years and his son, Roger, referred to his dad as his “hospice nurse” during his battle with cancer.  He also had a great sense of humor and was lovingly nicknamed “sassy pants” by his granddaughter, Kari.  Roger was a faithful member of American Legion Post 490 in Milwaukee for 44 years and also and was an active member of the Austrian Club and regularly participated in Germanfest for many years.  In his free time, he enjoyed working in his garden, canning the fruits and vegetables of his labor, making sausage and wine, hunting, fishing and ballroom dancing with his wife Edith.  While serving in the Army, Roger played baseball which grew into a lifelong love for the game and he became an avid Braves and Brewers fans after his return to the US.

The funeral service for Roger will be at 12:00 PM on Tuesday, February 19, 2019 at First Baptist Church (1500 Roman Road, Waupaca, WI 54981).  Rev. Chris Juvinall from Wausau Bible Church will officiate.  Visitation will be from 11:00 AM until the time of service at the church on Tuesday.  He will be interred at Central Wisconsin Veterans Memorial Cemetery, King.  Helke Funeral Home is assisting the family with the arrangements; you may sign our family guestbook at helke.com.

Sincere gratitude goes to the nurses and staff of Azura Memory Care in Rib Mountain and Heartland Hospice for their compassionate care for Roger and his family.

To order memorial trees or send flowers to the family in memory of Roger Adelmeyer, please visit our flower store.