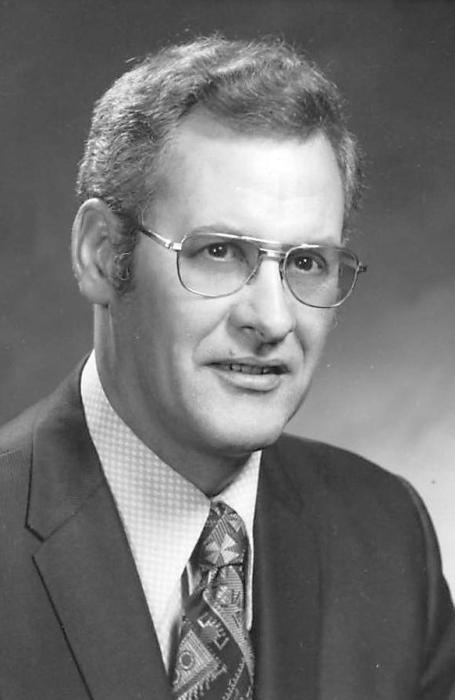 Bob was born November 17, 1923, in Durand, Wisconsin, to the late Reno and Viola (nee Aitken) Egan.  A graduate of Wausau High School, he loved baseball and skiing, music, hunting and photography.  As a young man, and before ski runs were created on Rib Mountain, he regularly hiked to the top to ski down, especially when the powder was just so.  He knew the mountain well and assisted the first owners of the Rib Mountain Ski Lodge to lay trails for downhill skiing.  He served on the ski patrol, raced, and taught his two daughters to ski at Rib Mountain.

Bob served his country in World War II as an auto mechanic with the 131st Large Ordinance, 4th Armor under General Patton returning to Wausau thereafter to work at Drott Manufacturing Co.  It was in Wausau that he met and married Doyonis (Dodie) June Goetsch in 1948 at Trinity Lutheran Church in Wausau.  Following an apprenticeship with a Wausau photography studio, Bob became a skilled portrait photographer.  He and his family moved to Merrill, WI where they owned and operated Robert’s Studio, providing Merrill residents with photographs for weddings, family gatherings, high school yearbooks, and local events for the newspaper.  It was in Merrill that Bob and his wife Dodie raised their two daughters.  Bob was a member of the Jaycees, served as a City alderman, played baseball on his church team, was a member of a bowling league, percussionist for the Merrill City Band, and created a ski school for local kids.

A member of St. John’s Lutheran Church, Merrill, Bob was an active member of the congregation, singing in the choir and serving as the choir’s main soloist.  He performed for numerous funerals and weddings, during which he often served as the wedding photographer.  In 1980 he and his wife moved to Wausau where he worked for the Department of Motor Vehicles (DMV). Bob then drove a medical transport van before fully retiring well into his 70’s.

Bob and Dodie loved to travel and upon retirement visited Great Britain, Alaska, retraced his WWII steps in Europe, and visited the Caribbean and Venezuela.  Bob was a member of the Wausau Elks Club, American Legion, and the Pommerisches Verrein.  He was a lifetime member of the VFW.   In 2011 Bob flew with other WWII veterans to Washington, D.C. as a member of the Wausau, September, 2011 Never Forgotten Honor Flight.  That experience was a highlight of his life.

Bob is survived by his wife of 70 years, Doyonis, his two children, Kolleen (Gar) Kellom of Saint Cloud, Minnesota; and Rhonda (Paul) Siegman of Germantown, Wisconsin; his grandchildren, Meagan Kellom, Guthrie (Megann) and Tocher (Darina) Kellom, Benjamin, Carolyn and Quinn Siegman, and Sheehan Siegman (Brian) Rammel; his great-grandchildren, Emmerson, Kohen, Makenzie, Keegan and Kamala Kellom.   He is further survived by loving nieces and nephews, sisters-in-law, brothers-in-law, and many other relatives and friends.

He was preceded in death by his parents, and his brother William Wayne Egan and his infant daughter Catherine.

A funeral service will be at 11:30 a.m. on Saturday, January 19, 2019 at Trinity Lutheran Church, 501 Stewart Avenue, Wausau, with Rev. Zach Holdorf officiating.  Family and friends may call at Helke Funeral Home, Wausau, on Friday, January 18, beginning at 5:00 p.m. until 7:00 p.m. and again at the church on Saturday beginning at 10:00 a.m. until the time of service.  Military honors provided by V.F.W. Burns Post 388 will follow the service at the church.  Private burial will take place in Maple Grove Cemetery, Village of Maine.

In lieu of flowers, memorials in Bob’s name may be made to the Trinity Lutheran Church Choir, Wausau, or to the Never Forgotten Honor Flight of Wausau, Wisconsin, www.neverforgottenhonorflight.com.

The family wishes to acknowledge and thank Aspirus Hospital Palliative Care staff for their compassionate and loving care.

To order memorial trees or send flowers to the family in memory of Robert "Bob" Egan, please visit our flower store.