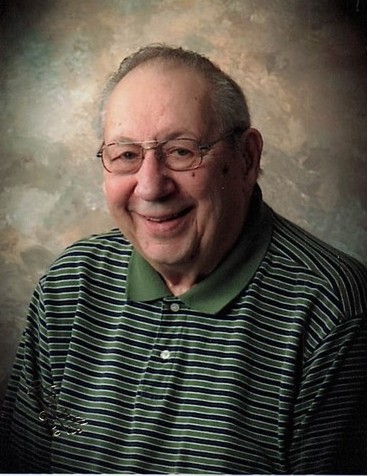 Richard, a proud veteran, was born September 1, 1930, in Merrill, WI, son of the late Edward and Alvina (Belter) Behrens. He was a graduate of Merrill High School in 1948. On June 19, 1954, he married Mary Lou (Drury) at St. Francis Xavier Catholic Church in Merrill. They were happily married for 66 years.

Dick was a veteran of the Korean War, serving in the United States Air Force from 1950 to 1954.

His employment was lengthy, starting with the Wausau Police department, then Peter’s Meat Products, and Metz Baking company where he retired in 1992. He worked part time for Laidlaw Transit where he officially retired in 2010.

A parishioner of the Holy Name of Jesus Church for over 50 years, he was a member of the Holy Name Society and served as director of the Ministers of Hospitality (ushers) for over 20 years. He was a co-officer of the very first Holy Name Athletic Association and volunteered many years at the Summer Fun. He always made sure that he and Mary Lou gave as much as they could to the church that they held so dear in their hearts.

Dick was a proud lifetime member of the American Legion Post 10 and the Knights of Columbus George Schreier Council No. 1069. He was also a member of the Marathon County Blood Bank 10-gallon Donor Group.

Dick was very sports-minded. He volunteered as a coach and manager of his boys’ minor, little, and senior league baseball teams in the Wausau area for 12 years. He also helped coach Holy Name basketball. He was an avid follower of the Wisconsin sports teams; the Packers, Badgers, Brewers and Bucks. If there were no Wisconsin games on television, he would watch any sports teams available...unfortunately including the Chicago Cubs. Dick also enjoyed hunting and fishing. He especially loved spending time hunting with his three sons, grandchildren, and other family members. Hunting in Wyoming and fishing in Canada were some of his favorite memories.

A mass of Christian burial will be celebrated at Holy Name of Jesus Catholic Church on Friday, November 12, 2021 at 11:00 AM. Visitation will be from 10:00 AM until time of service at the church. Following the service, there will be military honors and entombment at Restlawn Memorial Park Mausoleum, Town of Texas. Helke Funeral Home is assisting the family with arrangements.

You may sign the guestbook at Helke.com. Memorials may be given to the Church of Holy Name of Jesus, 1104 S. 9th Ave, Wausau, WI 54401. The Family of Richard would like to thank the staff at Rennes Health and Rehab, Aspirus Wausau Hospital ER and Palliative Care units for their unwavering compassion and support through this difficult journey.

To order memorial trees or send flowers to the family in memory of Richard Behrens, please visit our flower store.