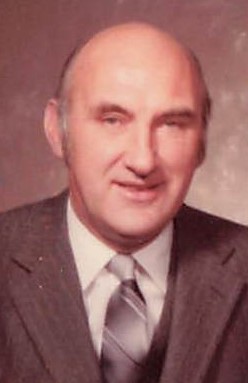 On Paul Schuett’s 90th birthday, he left us in the wee hours of the morning to celebrate his birthday with his loving wife Leah, family and friends in heaven. His loving daughter and son-in-law were by his side before he embarked on his journey.

Paul was born April 13th, 1930 to the late Herman & Sadie (Sarah Cowling) Schuett. He grew up with three brothers, Fred, Donald and William, Paul being the only survivor and the youngest of 4.

Paul Schuett was a very tall and dignified man, when Paul spoke, he received attention. He was a very distinguished man with his trademark bald head and a matching pocket square in his jacket pocket. Pauls’ successful lifetime career in retail started in the 50’s, first at Heinemann’s and then Winkelman’s Department store. In 1960, he opened his own business Lad & Lassie Children’s Store and in 1966 expanded to the Town & Country Ladies apparel. Paul’s hard work ethic lead him to expand his stores even further in 1972 and opened West Park Fashions, which was called a junior department store that serviced children, ladies and men’s fashions. Paul will be forever be remembered as one of 3rd Streets original specialty retailers.

In 1951, he married Leah Joan Brehmer, whom had a career in nursing. Leah gave up nursing to assist in the stores. They continued to work together for over 35 years.

Paul loved to be with people, but on the summer weekends, he chose to be at his beautiful lake home on Two Sisters Lake. He loved mowing grass, pontoon boating, entertaining friends or golfing. In 1999, Paul and Leah gave up their lake home and became residents in Timber Ridge Golf Course community in Minocqua. In the winter months, he and Leah enjoyed their home in Florida. They spent several years in Naples, FL and then later in Venice, FL.  During their early retirement years, they enjoyed extensive travel of the United States and Europe. Paul was also a huge Green Bay Packers fan and a season ticket holder; he spent many years going to the games with his brothers, as well as friends.

In the last two years Paul managed to break both hips and he was wheelchair bound. He evolved into this humorous, kind and appreciative man. He always wanted the staff to laugh at his witty humor.

He was cared for at the NCHC center. He loved all the nurses, CNA’s and helpers who took such good care of him. We wish to express our deep gratitude to Dr. Brian Smith all the staff at Southern Reflections and the Physical Therapy Department at NCHC.

Due to COVID-19, a private funeral service will be held at Restlawn Memorial Park Mausoleum, Wausau.

To share online memories and condolences with the family, please visit www.helke.com.

To order memorial trees or send flowers to the family in memory of Paul Schuett, please visit our flower store.