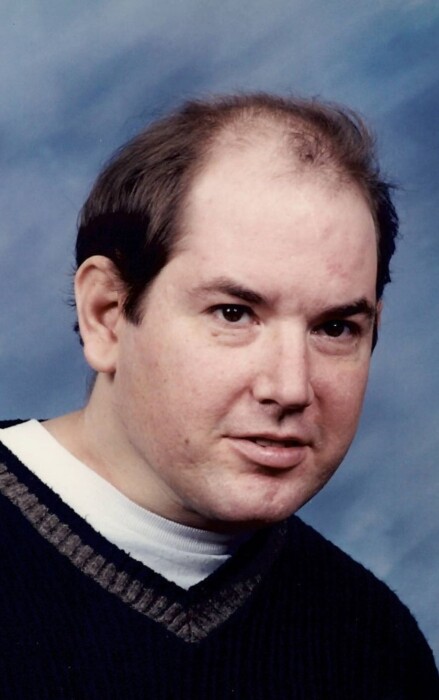 Michael Ray Loy, 54, of Marathon left this life unexpectedly to be with Jesus Sunday, October 17, 2021, at home with his family present.

Michael was born on September 29, 1967, to Charles and Nancy (Graveen) Loy. He attended Marathon Elementary school and worked at Wisconsin Valley Workshop for a short time. His caregivers were his parents and family members.

He learned about Jesus from his mom at an early age and knew Jesus well. He always said he wanted to someday be with Jesus and help him turn on the rain.

Michael loved gospel music, anything with Jesus’ name in it; Jesus Love Me and Raindrops Keep Falling on My Head were his two favorite songs. He liked taking car rides with his mom and dad. He loved trains and even took a ride on a locomotive in Laona, WI with his dad. He also went on several planes rides with his dad. He admired horses and talked about them often. He always said he wanted one.

He enjoyed coloring, playing cards, watching the Flintstones, Mr. Roger’s Neighborhood, the Price is Right, and gospel music TV programs. He liked to have company and would light up with a great big smile, greet you with a strong handshake and a loud, “Come on in!” He would say goodbye with that same great big smile and a loud, “You better get going!” or “Call me when you get there!”

Michael liked everyone. Anyone he met he would always say, “I like you!” He had the biggest heart and was always happy. You would have known when he wasn’t happy with his choice of words. He was loved beyond measures by his family. He will be missed more than words can say and he’ll forever remain in our hearts.

Michael was preceded in death by his mother, Nancy (Graveen) Loy.

“For God so loved the world that he gave his one and only Son, that whoever believes in him shall not perish but have eternal life”.  John 3:16

To order memorial trees or send flowers to the family in memory of Michael Loy, please visit our flower store.