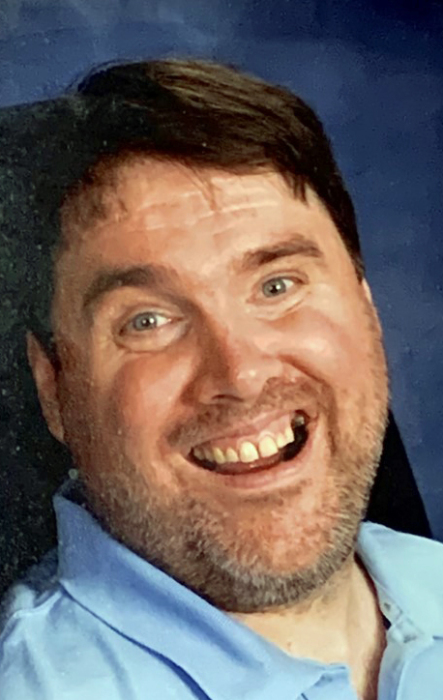 Michael Allyn Kohorn, 54, of Wausau, died on December 11, 2020, at Aspirus Wausau Hospital, ending 30 plus years of living with the effects of a progressive neurological disease process. He was called a “valiant warrior” for his persistence in hanging onto life with a “Michael laugh” to recognize something good and just and loving. In his booklet, he had said “God is good. God is good, good, good.” Michael let the light of Good through him being who he was…and is.

Michael was born on January 31, 1966, to James Kohorn and Nancy Wohld Kohorn Henricks. Watching the Milwaukee Brewers, Green Bay Packers, and adding to the Green Bay Packer wall of fame in his apartment were just a few of the things he enjoyed doing. He was a rock music fan who later became inspired by the singing of Celine Dion. He appreciated each of his dedicated caregivers who brought their unique gifts into his living day to day: Kinleiner Loretta Ulmschneider; Pat Thompson; Sharon Jacobson; Lori Mirek; Sherry Salyers; Laura Anderson; and Annette Lauby. Many of these special people were with him for twenty years or more. His mother, a kinleiner, was blessed to be a part of this caring team.

Michael was preceded in death by his sister, Marcia Kohorn, his brother, Marvin Kohorn as well as his maternal and paternal grandparents.

A funeral service will be held at 5:00 PM on Tuesday, December 15, 2020, at Helke Funeral Home, 302 Spruce Street, Wausau. Reverend Erik Olson will officiate. Visitation will take place from 4:000 PM until the time of services at the funeral home. Entombment will take place in Wisconsin Memorial Cemetery in Milwaukee, Wisconsin

Family and friends may go to www.helke.com to leave words of remembrance and online condolences. Memorials may be sent to First English Lutheran Church.

To order memorial trees or send flowers to the family in memory of Michael Kohorn, please visit our flower store.