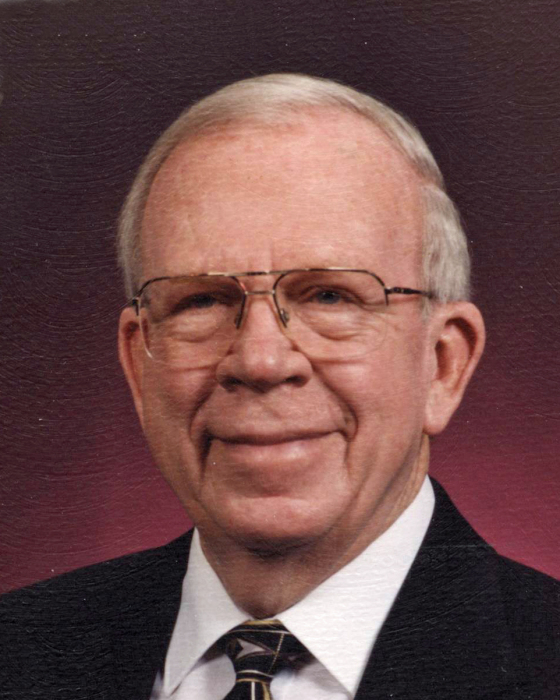 Marv was born June 29, 1926 to Emil and Alma (Kopplin) Lodholz in Wausau, WI. He lived his entire life on the west side of Wausau, making his adult home in the house he built in 1957. Marv was a lifelong member of St. Stephen Lutheran Church.

After the loss of his father at age 11, Marv got a job delivering newspapers to help support his mother with expenses. He delivered over 60 papers every day after school riding his bike, even in the snow. Marv loved to tell stories about the shenanigans he and his friends carried out during his younger years. These included sledding and biking down the hills of Rib Mountain, sneaking out of school, and dancing with as many girls as he could at church dances. To get out of a boring study hall in high school, he asked to be in the band class across the hall. The only instrument available for him to play was the tuba. He learned to play so well that he became “first chair” and learned to perform with the marching band.

Marv married Elaine Brandt in October, 1949 and welcomed son James in 1951. Marv and Elaine celebrated 57 years of marriage before Elaine passed away in November, 2006. They enjoyed card club, dancing, and entertaining friends and family. Marv and Jim shared many hobbies including golf, crediting Jim for helping him play ”better.”

Marv worked for over 40 years at the James River Corporation in Wausau as a partsman. His job was to keep the inventory for and fix whatever the paper making machines needed. He enjoyed that job because every day he learned how to fix another machine. He was able to use a lot of the skills he learned at work while taking care of the four apartments he and Elaine owned, being their own maintenance and service team.

Marv married Margaret (Maggie) Ziehlke in May, 2008. Marv and Maggie dated when they were in their teens, before they went their separate ways. Maggie passed away on January 4, 2021. Marv enjoyed Maggie’s sense of humor and zest for life. He helped care for Maggie in their later years.

Marv was preceded in death by his parents, Elaine, brother Leonard, son James, and Maggie. He is survived by his granddaughters Stephanie, Anna and Maggie; daughter-in-law, Laurie; stepchildren Randy (Donna), Brenda (Roger), Kurt, Yvonne, and Sheryl (Jody), and several nieces and nephews.

Marv was very proud of his German heritage and loved sharing his family stories and history, especially with Anna, telling her it is up to her generation to continue learning about their heritage. They worked on writing his family tree in the last few years of his life, coming up with some silly nicknames for the family members whose names he could not remember. Marv loved the story that Jim told about the moment Anna was born. At that moment Jim said, “Oh my gosh! She looks just like my dad!”

Marv’s family would like to thank the many caregivers and Aspirus Home Hospice who helped to keep Marv at home, in the house he built, for as long as possible. The care team was led by his stepdaughter, Sheryl Babl. Their hours and efforts are greatly appreciated.

The funeral service for Marv will be at 2:00 PM on Wednesday, February 24 at Restlawn Memorial Park Chapel. Pr. Jen Hoffman will officiate. Visitation will be from 1:00 PM until the time of service at the chapel. Facemasks and social distancing are requested by those in attendance. The service will be live streamed on Marv’s obituary page at helke.com. Helke Funeral Home is assisting the family with the arrangements; you may sign our family guestbook at helke.com.

To order memorial trees or send flowers to the family in memory of Marvin Lodholz, please visit our flower store.