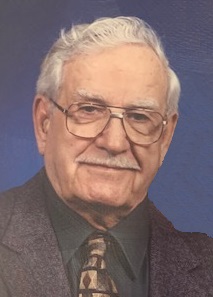 He was born on August 27, 1921 to the late John and Dora (Peterson) Mootz in the town of Maine. John served in the Army as a tank driver under General Patton and received a Purple Heart and many battle bars. He met Lillian Schultz at a dance, and they were married on December 7, 1940 at Faith Lutheran Church and he was proud to have been married to her for 79 years until she passed.  John and Lillian were wed prior to him leaving for World War II. After serving in the war John built the family home in Schofield where they lived for many years. John retired on his birthday at 62 from James River. He was an avid hunter and fisherman who enjoyed spending most weekends at his “palace” in New Wood, where he also enjoyed snowmobiling and making sausage. John had a deep faith and will be remembered as a good dad who was proud of his family.

A funeral service will be at 12:00 pm on Tuesday, March 9, 2021 at Trinity Lutheran Church, 501 Stewart Avenue, Wausau, with Rev. Zach Holdorf officiating.  Family and friends may call beginning at 10:00 am until the time of service at the church.  Entombment will follow in Restlawn Memorial Chapel Mausoleum, town of Texas. In lieu of flowers, memorials may be made to Trinity Lutheran Church.

John’s family wishes to thank Aspirus Hospice, specifically Dr. Kevin O’Connell and the nurses, as well as the staff at Bell Tower for their wonderful care and concern.

Due to current recommendations, masks will be required and social distancing will be observed.

To order memorial trees or send flowers to the family in memory of John "Jack" Mootz, Jr., please visit our flower store.