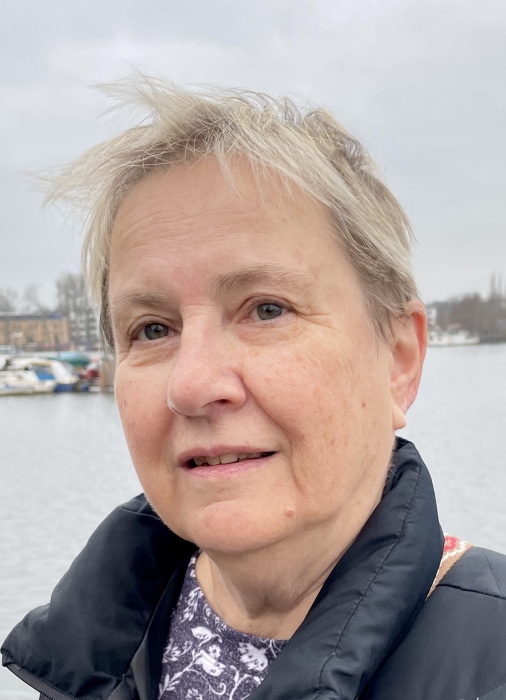 Jenny Tegart passed away on August 15th, 2022 at Marshfield Medical Center-Weston, after a brief illness, surrounded by her loving family.

Jennifer Maud Tegart was born on September 8th, 1949 in Cape Town, South Africa to Georgina (nee Gibson) and Walter Sleggs. Her mother, Georgina, was a registered nurse who immigrated to South Africa from England, and married Walter, a pharmacist. They had four children, Bill, Rosemary, Elizabeth and Jennifer. They eventually settled in Rhodesia (Zimbabwe). One of Jennifer’s earliest memories is taking a steam train from Cape Town to their new home in the capital Salisbury, in 1956.

Although their father passed away in her youth, Jennifer remembered her childhood fondly. She was spirited, mischievous and very beautiful. As a young woman, she caught the eye of the boy next door. She fell deeply in love with Nigel Tegart, a relationship that would bring her adventure, family and an enduring love story.

Nigel and Jennifer were married and they honeymooned in the Eastern Highlands of Rhodesia.  In the years following, Jennifer and Nigel welcomed their children, John, Georgina, David and Thomas. Her family brought her great joy, and that joy was magnified many times over with the addition of daughters-in-law and grandchildren.

An electrical engineer, Nigel was offered opportunities to work around the world and Jennifer was thrilled to accompany him. She enjoyed postings around Southern Africa, England and Iran. Early in their marriage, between assignments, they toured Europe in a van with their two eldest children traveling as far as the French Alps. They lived for a while in the Eastern Cape, South Africa, in the area around Mthatha, formerly Umtata, and Johannesburg, South Africa. Jennifer’s children were always first in her mind. While her love for Africa was strong, she was determined to relocate to the USA, a place she believed would secure their future success.

In 1990, she used her inheritance from her mother to bring her family to tour America. She managed to create an itinerary that included everyone’s wish list, while honoring America’s history and landscape. The result was a hodgepodge of Niagara Falls and Graceland, the Smithsonian and Daytona Beach, New York City and Pike’s Peak, Disney World and Toad Suck Ferry, Arkansas. In 1992, her dream came true, and she immigrated with her family to Rothschild, Wisconsin.

She worked at Shopko Optical in Rothschild until her illness last week. It was almost impossible for her family members not to bump into someone who would only buy their glasses from Jenny. She was proud to be honored for her sales by her company with a trip to Arizona where she got to design and name her own pair of glasses.

Jenny’s house in Rothschild was home to so much happiness and celebration. It is fondly remembered for her perennial gardens that ate up more lawn space each year, and her perennial feasts at Easter, Thanksgiving and Christmas. She used to joke that if Nigel was allowed to curl and golf then she was allowed spend an equal amount on her grandchildren. Nigel knows he will find future clothing and shoes for her two youngest grandchildren tucked away in the spare room closet.

Her move to her Birnamwood house in 2012 allowed her to embark on her dream of a large vegetable garden surrounded by fruit trees and berry bushes. On a flat area just below the house, raised garden beds soon began to sprout.  Neighbors gaped at the scale of the project. In the end, Nigel joked, it was a garden that could be seen from space - as evidenced by a printout from google earth. She tended to it up until the day she fell ill, and her pantry is full of preserves and jam. Her other hobby was birdwatching from her dining room. Nigel built her a multilevel feeder to attract all manner and form of birds and never begrudged the small fortune she spent on seed, syrup and suet.

Her home, wherever it was, was the meeting point for her large family and the place for all holiday meals. She somehow managed to include everyone’s special dish and always ended the meal with her famous brown pudding. This dessert, common by name, but not by taste, will finally be passed down to the next generation of Tegarts (although its superlative execution is not secured).

Jenny was an exceptional wife, mother, grandmother and friend. She leaves behind a legacy of love and beauty and kindness. May the lord bless her and keep her and give her peace.

Jennifer is survived by her husband Nigel, her one true love and best friend, and by her children John (Laura), Georgina, David (Alena), and Thomas (Jenn) and grandchildren Kaitlyn, Sarah, Jack, Evan, Elizabeth and Albert. She is further survived by her sisters Rosemary and Elizabeth. She is preceded in death by her parents and her brother Bill.

A visitation will be held at Helke Funeral Home, Wausau on Friday August 19th between 4pm and 7pm. Please join us to share your joyful memories. In lieu of flowers, the family prefers donations to be made in Jenny’s honor to Operation Christmas Child, Samaritan’s Purse, PO Box 3000, Boone, NC 28607.

To order memorial trees or send flowers to the family in memory of Jennifer Tegart, please visit our flower store.