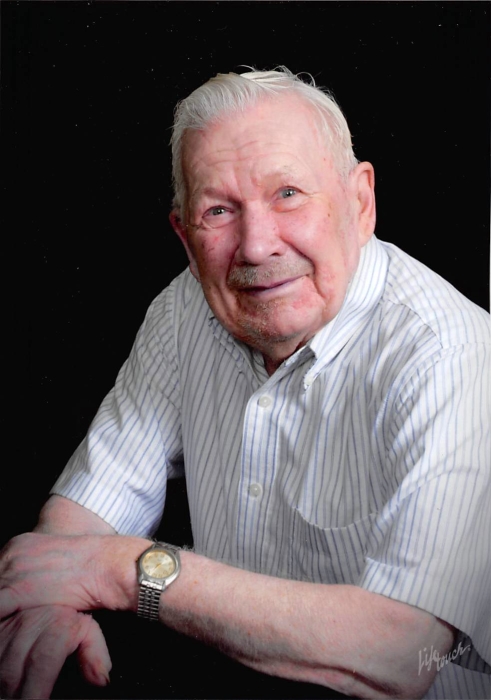 Henry Paul Ahrens, age 84, went to spend eternity with his beloved wife of 57 years, Elizabeth “Liz”, on Sunday, November 11th, 2018.  Henry went to his heavenly home on the Ahrens family farm surrounded by his loving family.

Henry was born on March 2nd, 1934 in the Town of Cassel, son of the late Walter and Frances Ahrens.  On June 19th, 1954, Henry married the love of his life Liz Schult at Zion Evangelical Lutheran Church in the Town of Maine.  Together Henry and Liz started their family on the Ahrens homestead, where they raised 6 children, 17 foster children, and watched their family grow with grandchildren and great grandchildren.  When it came to Henry’s family he would do anything for them.

Henry was proud to be a lifelong dairy farmer, milking cows until 2016.  In his early years Henry held many titles, including the local Mr. Fix-it, milk hauler, Renk corn dealer and bartender at Poplar Tree Ballroom.   Besides farming, Henry’s favorite job was driving school bus, which he did for 37 years, for the Marathon School District before retiring in 2010.  All of the children enjoyed having Henry as a driver, so much so they would fight over who got to ride in his bus.

After a long day working on the farm, whether it be milking cows, working on a John Deere tractor or bailing hay, Henry could be found on the front porch or around the kitchen table with his family and friends enjoying polka music, a slice of cheese and a cold beer.  The walls of their home will long echo with life lessons and Henry’s many stories, all told with a child-like sideways grin and a twinkle in his eyes.  Some lessons learned were you could never go wrong with a Ford truck or a John Deere tractor, if you’re not feeling well, work a bit harder, and almost anything can be fixed with a bit of baler twine and ingenuity.  Henry also enjoyed attending toy shows and collecting toy tractors, preferably John Deere.

Beside his parents he was preceded in death by his wife, Liz Ahrens; sisters, Laura Liebers, Dorothy Woller, and Adeline Moser and his brother Ervin Ahrens.

The family would like to express their sincere appreciation for the staff at Aspirus Comfort Care and Hospice Services, especially Shelly for her support and assistance.

To order memorial trees or send flowers to the family in memory of Henry Ahrens, please visit our flower store.