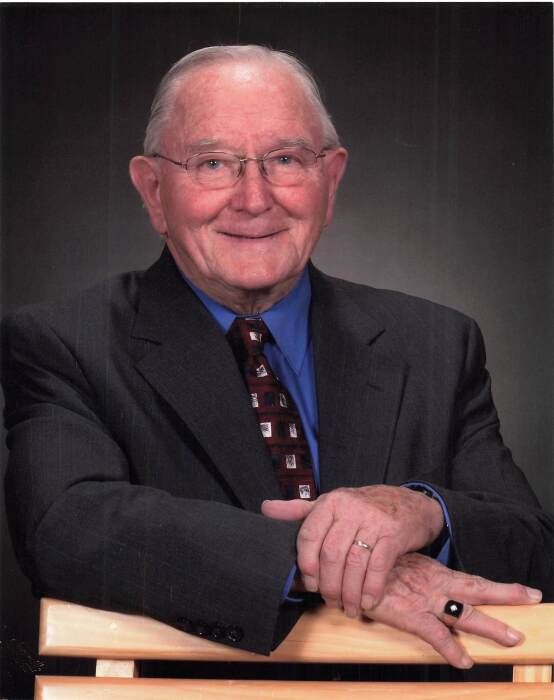 Don was born in the Wausau on August 30, 1930 to the late Albert and Helen (Janke) Hahn. He attended Trinity Lutheran School and graduated from Wausau High School in 1948. He earned a business degree before joining the United States Marine Corp on February 15, 1951. He served his country honorably in Korea earning the Good Conduct Medal, Korean Service Medal with 3 stars, United Nations Service Medal, Letter of Appreciation, and the National Defense Medal, before his honorable discharge on February 14, 1954. On October 27, 1951, he married Hazel Lemon in Tomah, Wisconsin. Together they raised three daughters, Sandra, Susan, and Julie. Hazel was called home at an early age of 55 on September 1, 1986.

Don worked as an accountant for over 45 years. When he wasn’t busy at work, he enjoyed sports of all kinds; curling, bowling, cross-country skiing, biking, and fishing and hunting at the family cottage up north. On his 50th birthday, he even biked the 70 miles to the family cottage. He loved and played tennis, teaching his daughters and later assisting at Wausau West while his grandchildren were on the teams. He also umpired Little League and kept score at Sunny Vale Softball Complex. The Packers and Brewers were also favorites of his to watch. He was a man of great faith and a life-long member of Trinity Lutheran Church. He was a dedicated father, grandfather, and great-grandfather. He will live in the hearts of all who knew and loved him.

In addition to his wife and parents, Don was preceded in death by his sister Dorothy (Lloyd) Goetz, as well as his brothers Alfred (Elsie) Hahn, Elroy (Marion) Hahn, and Edward (Laraine) Hahn.

Don’s family would like to thank all the diligent staff at Copperleaf Assisted Living in Schofield and at the Aspirus Wausau Hospital Covid Unit for their presence and how well they cared for our dad.

A public viewing is set for Friday, October 23rd, from 10:00 – 11:00 at Trinity Lutheran Church on Stewart. Please plan to wear masks and stay socially distanced. A private family service will follow at 12:00 PM. There will be live-streaming of this service. For those unable to watch the live-streaming, there will be a webcast available a day or two later at www.helke.com. A celebration of his life is planned at the family cottage at a later date.

In lieu of flowers, please direct memorials to Trinity Lutheran School or the Alzheimer’s Association of America.

To order memorial trees or send flowers to the family in memory of Donald Hahn, please visit our flower store.