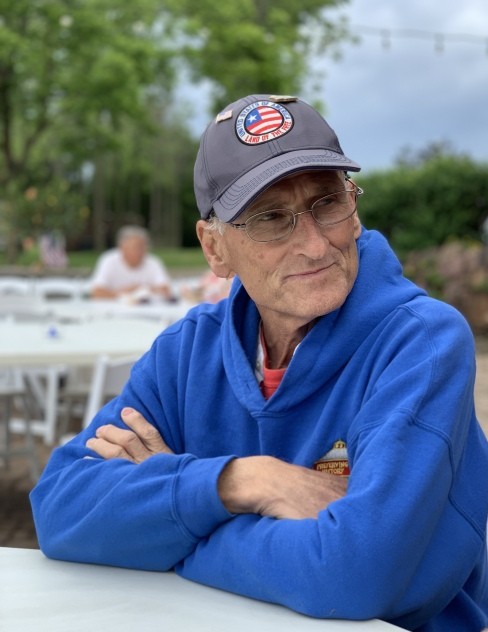 It is with heavy hearts that we share the passing of Dennis K. Griffin on September 5, 2021, at the age of 70. After a tireless fight with idiopathic liver disease, Dennis passed peacefully at home with his wife Peggy by his side.

Dennis was born on July 3, 1951, to Chester and Darlene (Kinter) Griffin and was raised in Humboldt, Iowa. He was the middle sibling to his older brother Barry Griffin and younger sister Sandra (Carrasquillo). During Dennis’ early years, he had a passion for adventure and a desire to learn. He spent countless hours with his brother canoeing, even traveling for two days together on a 100 river-mile trip. The two lived off the land, camped riverside, roasted field corn over the fire, and made their way back home. Dennis enlisted his sister to help him check beaver traps along the riverbank, smoke out beehives, and harvest honey.  He even ordered bees to start his apiary business, and the post office was not impressed when asked to deliver a buzzing package.

In middle school, he worked on a hog and beef farm: cultivating corn, cutting hay, bailing straw, combining oats, and caring for many animals. While the farmhouse was a good enough place to eat and sleep for most, Dennis decided he needed more seclusion. The farm had a small unused chicken brooder house built on skids. Together with his brother, they attached it by log chain to a tractor and pulled it ¾ mile to a spot next to the Des Moines River. Though hardly a mansion, for Dennis, this home provided him with the perfect amount of the seclusion and yet another adventure.

While in high school, Dennis’ desire for exploration expanded from Humboldt; he started hitchhiking as a means visit his brother at University in Iowa City and eventually spread to destinations across the Midwest. It was a new adventure each time he got into a semi-tractor or a car with someone.

After graduating from high school in 1969, Dennis headed off to vet school at Iowa State University in Ames. During a rotation in Wausau, he knew he wanted to make his home in Wisconsin. After graduating in 1976 with his Doctor of Veterinary Medicine, he moved to Wausau, where he spent 20 years as part of a local clinic before venturing out as a sole practitioner. Dennis practiced on his own for 25 years, right up until his passing. Dennis’ career as a veterinarian fulfilled his constant desire to learn and build relationships with his community. He had an incredible clientele - many became close friends.

Dennis was blessed with two children (Katie & Dave Griffin) with whom he engrained his gentle demeanor and love for the outdoors. It was important to Dennis that his kids have the opportunity to grow up on a farm, surrounded by the beauty of God’s creation. He purchased a farm in the Town of Maine in the 1980s. They spent countless hours riding horses, raising steers for the county fair, hosting sleigh rides for local schools, and helping neighbors bale hay. The kids cherished jumping into the vet truck joining their dad for calls; many special memories were made driving down the road, snacking on cheese curds, headed to the next stop.

As his children grew up, their endeavors expanded from the farm on Hillcrest Drive. Dave and Dennis shared a love for downhill skiing. In the winter of 1995 into 1996, they took the “Outdoor Emergency Care” training together and became part of the Rib Mountain Ski Patrol. There was an annual patrol family party at which Dennis cooked the meat. This was the start of the hog roasting days. It is rumored Dennis spent these February nights in a tent atop the ski hill, tending to the roaster. After Dave went off to college, Dennis stayed on the Ski Patrol, where he was a member for over twenty years and made several close friends in the Granite Peak Ski Patrol family.

Dennis shared his love of the great outdoors and God’s creation with Dave and Katie through cross-country road trips and camping. They packed the Jeep full and headed out west to the mountains, up to the Calgary Stampede, and many national parks along the way. Dennis and Katie traveled east to Pictured Rocks in Michigan, where they hiked 40 miles over four days across the famous national park. Dave and Dennis road-tripped to Alaska where they camped, backpacked and created great memories for nearly two weeks. The two also backpacked the Australian Outback while Dennis was in Sydney attending a global veterinary education meeting, an adventure and a half.

On a solo trip in the late 1990s, Dennis traveled to England. After admitting he should not be allowed to drive in Europe, he spent four days walking hostel-to-hostel where he was captivated by arboretums and beautiful gardens dotting the countryside. He poked his head into the farmer's barns, asked everyone he met about their story, and joined in cheering on a soccer game at a local pub. During this adventure, he came upon the veterinarian and author James Heriot’s former practice, where he visited with Heriot’s son (also a practicing veterinarian). This trip was impactful for Dennis’ life and his vision of the future.

Dennis met the love of his life, Peggy (Lonsdorf), while working together at the vet clinic in Wausau. The two were soulmates (as he always called her) from the beginning. Whether they were running a Coggins clinic in February or planting flowers in May, they were always happy just to be together. Their relationship was built on true love and a passion for the same things. They shared a love for gardening, celebrating with family, raising kids on the farm, drinking coffee, and exploring all the bed and breakfasts they could. At the end of each day, you could always find them sitting side-by-side, creating their next adventure.

Speaking of adventures, many coincided. Shortly after the new millennium, Dennis jumped headfirst into sled dog racing as a veterinarian on the trail. He tested the waters in northern Minnesota at the Beargrease Marathon and was hooked. Soon after, Dennis became an official veterinarian of Alaska’s Iditarod Sled Dog Race. He spent many Wisconsin winter nights sleeping outside in a tent, in preparation. The opportunity to practice veterinary medicine, immerse himself in local cultures, travel by bush plane between checkpoints, sleep outdoors, and listen to tales of Alaska was everything Dennis loved. He was a proud member of the Iditarod veterinary team for 17 years and had incredible stories every time he returned home from Alaska.

Back in Wausau, Dennis and Peggy’s shared values of creating memories and celebrating traditions were the basis for the formation of Willow Springs Garden. In one of these side-by-side evening chats, Dennis mentioned he had overheard (while out on vet calls) that the Maine Town Hall was to be demolished. The hall was a staple in the community and represented a place where memories were made, and family traditions took place. So, why not keep it going? He decided to save the hall and move it to his farm.

The hall was moved, and foundations were poured. In the midst of renovations, Dennis and Peggy were wed on May 27, 2006. They devoted themselves to one another in their beloved gazebo outside the hall and across from the Wedding Garden planted in their honor. And per usual, they had a few surprises up their sleeves; no wedding is complete without a horse-drawn carriage and fireworks.

When Dennis began his life with Peggy, he also became a dad to three more kids (Kathleen, Vincent and Andrea Vignali).  When he picked them up from the babysitter, the three kids squeezed into the few empty spaces in the vet truck for the short ride home. Dennis engrained the same principles into these three as he had with his own children. They shared family camping trips across the U.S., raising steers for the fair, Friday night gymkhanas, days at the ski hill, and (veterinary) calls to ride along on. He was very patient…road tripping with a pet snake in the backseat, accepting an indoor dog, and cousins frequently coming over to play. What a special man. Dennis was the dad that didn’t have to be, but was.

As the children grew up, so did Willow Springs. In the 2000s, Dennis decided to start a corn maze. He created the first maze by hand and continued this painstaking process each year. It is a mystery how he was able to envision what each maze would look like from a plane and plot it out on the ground. Each year he would take someone new along in the plane to inspect his work of art (good, bad or ugly). Together with Peggy, the corn (and haunted) maze evolved into a well-oiled machine that has been a tradition in the Griffin household and the local community for 21 years.

Dennis and Peggy were thrilled with the impact the Town Hall restoration started to have on the community. Just as they were getting comfortable with what Willow Springs would be, Dennis decided to move an old round barn that was just down the road.

In 2006, after extensive planning, the Round Barn was moved to its current location at Willow Springs. The round barn represents another place for families to build memories, share family traditions and celebrate life’s biggest moments. The barn is also a place for stories of the past and preserving history: something of great importance to Dennis. The meticulous restoration of the barn, involving project after project represented exactly how Dennis loved to live. He was constantly exploring and always planning his next adventure.

Dennis was a visionary and thought in ways others could only dream of. He impacted his community and his family in immense ways. His gift to everyone is the beauty he has created at Willow Springs. His presence surrounds every single person who walks through the gardens, the round barn, the hall, and the maze, or rides on a sleigh into the woods (at the farm he purchased when the whole thing started).

Donations in lieu of flowers will be used to continue Dennis’ legacy and vision at Willow Springs. https://www.willowspringsgardens.com/sponsorship.html

All services will take place at:

Tuesday, September 14th at 11am

To order memorial trees or send flowers to the family in memory of Dennis Griffin, please visit our flower store.