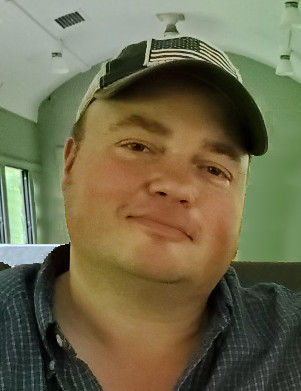 Dan graduated from Wausau East High School in 1993. Anyone outside during lunch would have seen him driving around in his Pontiac--this car was his pride and joy, and he held a lot of memories cruising around with all his friends. After high school, he spent time working in the "real world," and eventually went back to college at Viterbo University in LaCrosse, Wi, where he graduated with a Bachelor's Degree in Marketing in 2003. He loved the city of LaCrosse and often talked about bringing his family back to tour his old stomping grounds. It was always a place he regarded as "just so pretty." After graduating college, he moved back to Wausau where he met his wife. On May 5, 2007, Dan and Caryn were wed in a beautiful ceremony in the woods next to his childhood church. In the years following, Dan and Caryn welcomed their children, Lucas and Jacquelyn; they were his whole world, and every step and breath he took was for them.

Dan was incredibly loyal, selfless, and dedicated to his family and friends. Dan's kids were his whole world, and he prioritized giving them new experiences, opportunities, and memories. He often spoke of his childhood and wanted his kids to experience things he loved to do when he was young. Most recently, he took his family on a mini vacation to his in-law's favorite camping spot in Michigan's upper peninsula. He was able to relax and watch his children enjoy time in the woods and lake. Taking his children out to fish was a great joy for him (he once spent hours online trying to find a great local spot just to take them trout fishing). Earlier this year, he made a point to ensure the kids got their hunter safety completed; he loved sitting in the woods with them every fall. He was always making time to watch a bowling meet, a dance competition/recital, a school choir concert, or orchestra concerts. He was always there as their biggest fan to support their passions. Along with his children, his nieces and nephew were very special to him. He would travel far distances to be there for them, and he loved watching the children in his life be happy, pursuing things they love. Daily calls were made checking in on his parents, and he was sure to be on his way if they needed anything. And on days when they didn't need anything, he was always stopping by just to say "Hi." He loved checking in with his big brother, too. You would know when they were on the phone together based on Dan's tone--it was always a great call. Dan had a close relationship with his in-laws as well. They talked often, and he was able to give them a well-deserved comeback when needed. And finally, to say he loved his wife would be a clear understatement. They came into each other's lives at the exact moment they needed to. He would do simple, little things to make her smile and show his love. Sometimes it was a simple hug in the middle of her making dinner, other times it was giving her a gift she had been hinting about for a while. He was a listener and paid attention. No matter what, he was supportive of her and gave her love like no one else ever could. Dan's love to his family was a continued, beautiful glimpse into heaven on Earth.

Dan was always giving back to his community, and willing to lead and serve where needed. In spring 2021, Dan was able to fulfill a life-long dream of owning his own business by starting an Ace Handyman franchise with his wife, keeping them busy. His hope was that one day the children would take over and continue to help the community he grew up in and loved so dearly. He was very passionate about starting an apprentice program as well; he believed the skilled trades were a great place for anyone to be. Through their business, Dan became involved with many groups. He joined the local Lions Club with his father-in-law, Adam, even taking on a leadership role. Dan found his church to be a great place to find peace. He served in many roles within the church and was always there to lend his dad a hand with building maintenance. His favorite spot had always been the back woods behind the church. In fact, he spent 3 weeks in April of 2007 getting it ready for the perfect wedding day for him and Caryn.

Dan loved to make people laugh (always ready with a good dad joke), and was never afraid to learn something new--sometimes taking on more projects than he may have been able to finish, but always making his best effort. His kind smile was always on his face, making those he met instantly want to be around him again. During his (limited) down time, Danny loved watching old Red Green re-runs and sharing them with anyone that would watch. He also loved watching Bob's Burgers with his kids, and many references to this show would appear in their daily conversations. He loved being outdoors (camping, hunting, fishing, camping, snowmobiling, or taking the "scenic route" home)-- always in one of his many baseball caps.

The family would like to send a very special thank you to Pastor Russell Kampher, Aspirus CICU and IMC Staff.

We love you, Danny. Thank you for bringing joy, adventure, and authentic love into our lives. May the Lord bless and keep you until we are united again. Photos or virtual condolences may be emailed to danielmbartelt@gmail.com. Monetary donations will be put towards funeral costs and college funds for his two children.

To order memorial trees or send flowers to the family in memory of Daniel Bartelt, please visit our flower store.